...well, to Capitalism, anyway. Says the Rev Giles Fraser in an interview with the Guardian:

"I used to be a socialist and for a long time I did have the view that there was something intrinsically immoral about capitalism. I changed my mind quite fundamentally about that quite a few years ago. I had a conversion sitting in Notting Hill market, reading the chief rabbi on the subject – an essay called 'the moral case for market economy'.

The essay appears in Rabbi Sacks's 2003 book The Dignity of Difference.

Serena's opponent is an Ahmadinejad fan

I was enjoying watching French player Aravane Rezai give Serena Williams a run for her money in the opening round of Wimbledon (currently in the 3rd set) until I realised that Ms Rezai, born to Iranian parents, was a fan of Mahmoud Ahmadinejad - and even presented him with a pair of tennis rackets because he "has shown Iran's power to the entire world" and she is "really proud of him". See an interview with her here.
Go, Serena, go!
Posted by Miriam at 2:30 PM 0 comments

Petronella Wyatt's sensitive piece about the bigots of West Dunbartonshire council - who have banned books from Israel - includes the following anecdote about the reach of antisemitism in Britain today:

As we basked in the sunshine on the House of Lords' terrace, [the life peer] said: 'The Jews have been asking for it, and because of the atrocious way Israel behaves, we can finally say what we think.'

It's a shame she didn't expose him - presumably for legal reasons. But if he was silly enough to say something like that to a journalist once, hopefully he will do it again -- under circumstances in which he can be named.
Posted by Miriam at 12:23 PM 0 comments 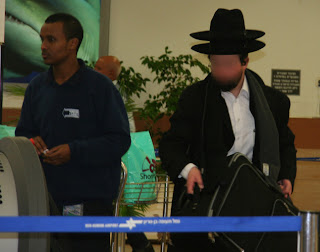 OK, I'm back. Sorry for the longer-than-planned absence.

I took this picture on my way back from Israel, at Ben Gurion airport, in January. So go on, share your best captions....
Posted by Miriam at 8:27 PM 0 comments

Due to a family simchah, I'm going to be offline all of this week - back around January 17th or 18th. See you back here then!

Miriam
Posted by Miriam at 7:26 AM 0 comments

Why I hope Britain's next chief rabbi is parochial

In my Forward column this week, I ask what Britain needs from its next chief rabbi:

The announcement last month that the British chief rabbi, Jonathan Sacks, will retire in 2013 immediately set off a flurry of speculation about potential successors. For Anglo-Jewry, this is a crucial moment. The chief rabbi is considered the leader of the community, setting its tone and priorities, and is its most prominent face to the outside world. With the last 10 holders of the post serving for an average of 28 years each, the choice will make a real difference to a shrinking community, struggling with its place in British society amid a surge of anti-Israel sentiment and the rapid growth of an often hostile Muslim population.

But do not expect another figure of Lord Sacks’s intellectual stature or prominence. Unlike in 1991, when Sacks became chief rabbi, there is no front-runner; barring surprises, the likely contenders to replace him are all competent community rabbis with little or no national profile. This is a good thing. Under Sacks and his predecessor, Immanuel Jakobovits, Britain’s chief rabbi became a figure of national, and even international, importance. But that is not what British Jews need most from their next leader.

Read the whole thing and come back here to comment.
Posted by Miriam at 8:30 AM 0 comments

An absolutely bizarre story rumbling on in Jerusalem right now.

Rabbi Eliezer Berland is the elderly leader of the Shuvu Bonim community, affiliated with Braslav. Or at least, he was. It recently emerged that he had been held captive for 10 years (!) by his son and grandson, who controlled his every move, charged his followers exorbitant sums to visit him (presumably under their supervision), and took control of the institutions which Rabbi Berland supposedly headed.

A few weeks ago Rabbi Berland staged his own kidnapping and fled to the north, where he revealed to his closest followers the torment he had been through. The Jerusalem Post reported at the time:

“I was locked at home for 10 years,” he said. “They wanted to admit me to an insane asylum. Over the course of the last year, I’ve been admitted to hospitals every two weeks, because of the duress I was subject to,” he said.

The senior Berland said he’d return only on the condition that he would regain control over the community, and the security personnel surrounding him at his son and grandson’s demand be removed, thus enabling direct contact between him and his hassidim.

Why am I bringing this up now? Because the rabbi's attempts to re-take control of his community are encountering some resistance, led by his son, grandson and his own wife. In the last few days, the rabbi wrote a letter "firing" the followers he himself appointed to run the community. In an effort to prove that the rabbi is being mentally pressured by his wife, his followers bought into the public domain evidence: a "punishment note" written by the rabbi, repeating 200 times the line "I will not use the phone and cellphone without permission from my wife".

The note is here. If authentic, it is quite harrowing to look at - because it seems to be evidence of a horrible case of abuse of the elderly. And not only by his son and grandson (as one might have originally understood), but apparently by his own wife. If the facts are as presented, this seems to be domestic abuse - no less - and he needs help extricating himself from an abusive environment.

I do wonder though about his followers' behaviour. On the one hand you can read their determination to return him to his rightful place at the head of the community as an expression of love, devotion, and belief in the rabbi. On the other, it may just be part of their own power struggle, an opportunity to get rid of the rabbis' son and grandson, who are clearly nasty pieces of work. I particularly wonder at their decision to publicise the "punishment note", which may make their point, but seems disrespectful. Perhaps there are elements of both.

I'll give them the benefit of the doubt. But the truth is that no matter how much they love him and want him back at their head, what Rabbi Berland needs right now cannot possibly be the responsibility and pressures of leadership. He needs to get away from his awful family. He needs to recover from abuse. He needs practical and emotional support and possibly therapy. I hope they can get him what he really needs, not what they need from him.
Posted by Miriam at 8:23 AM 0 comments

On the bright side, Israel has apparently learned one of the lessons of the al-Dura fiasco: potentially damaging lies about the IDF's conduct have to be answered very quickly in order to prevent the allegations from taking hold in the public's imagination. By the time the official, thorough IDF investigation exposes the truth, the lie has already gone halfway around the world.

Hence, in the case of Jawaher Abu Rahmah, the woman who the Palestinians claim died as a result of Israeli tear gas, the Israeli army quickly presented a list of reasons why it seems likely that she died of another cause - or at the very least, why another cause (possibly cancer) was central to her death.

On the less good side, the haste means that the IDF's report may be, well, a little shaky in parts. One of the reasons (amongst many very reasonable ones) given for their doubts about the official Palestinian version of events is that

That is, one reason why they suspected the medical reports received from the Palestinians were fake was that they were in clear and legible handwriting - and not in the usual doctors' scrawl!

Go tell that to the 9/10ths of the doctors who - despite all the jokes - stats show do actually write nicely...

Achilles heel of the gender-separate buses

Over the past few weeks, there have been complaints by the bus companies running gender-separate lines in a couple of Charedi neighbourhoods and cities that too many of the women, who get on the bus through the back door, are not paying for their journey. Now there has been a halachic ruling that avoiding paying on the bus is theft. Well, duh!

The most basic point - which has been made by many commentators - is that there seems to be a shameful distortion of values when women riding a bus designed to increase "modesty" have to be reminded not to steal.

But I wonder something else. Over the past couple of years, there have been legal challenges to the 'Mehadrin' separate bus lines, as well as protests and other actions. All to no avail, as seen today when the Supreme Court agreed that these bus lines could legally continue. But could this be the issue that will eventually defeat these bus lines? After all, the bus companies - mostly private - cannot run routes where up to 30% of passengers are getting on for free forever. If the halachic ruling does not have the desired effect, and a high proportion of women continue to steal, at some point the Mehadrin lines will become economically unviable. (Which is possibly one reason that the practise is being cracked down on.)
Posted by Miriam at 7:26 AM 0 comments

Some updates on stories I've written about recently:

There were quite a few broken Jewish hearts when it emerged late last year that Rachel Weisz had left hubbie Darren Aronofsky and was instead dating the rather dashing, but distinctly non-Jewish, Daniel Craig. But, rather than marrying "out", could she bring him into the faith?

According to the Evening Standard diary today (no link), the Bond star - who has played a Jew in three movies, including a Mossad agent - was spotted this week paying a visit to a deli in the tony London neighborhood of St John's Wood:

It is believed Rachel was suffering from a post-Christmas cold and considerate Craig ordered some hot chicken soup as the perfect cure for his ailing co-star.

Chicken soup: a good start. We won't read too much into the reference to Christmas (which they spent together)...
Posted by Miriam at 7:31 PM 0 comments

The phenomenon of non-Jews wanting barmitzvah parties has been known for quite a while, especially in the States. But I was intrigued to see that a British Christian school in Bradford is offering its pupils a 'barmitzvah programme' - adopting not the frivolous aspects, but the serious ones.
The course is in four modules:

The year ends with a celebration evening. Each young person invites guests to a leisurely meal where the members of their class makes a presentation on a topic subject of their choice.

It sounds kind of similar to the batmitzvah programme I went through as a schoolgirl in Israel. If only most diaspora Jews took their barmitzvah year as seriously as these Christians....